Of all the Arts and Crafts movement enterprises, Onondaga Metal Shops remains among the least well understood. Onondaga Metal Shops was a short-lived company organized in 1905 by Edward C. Howe and located at “to manufacture art metal goods consisting of hand hammered copper and brass lamps, trays, smoking sets, advertising signs and the like.” Howe, the son of a Syracuse jeweler, had worked with his father up until late 1905 when he formed Onondaga Metal Shops. Located at 581 South Clinton Street, the firm advertised for metal workers, specifically seeking Germans, as late March 1906, but despite the appearance of growth, the company was likely never a viable operation.  Unfortunately for the business, as the Syracuse Journal reported in July 1906, “It was said that Edward was inclined to follow the fast side of life socially, and it had come to the ears of the family that he had been paying attention to a certain woman whose name was unknown to them.”  He left Syracuse on July 16, abandoning his wife and leaving her essentially destitute, and walked away from a company with many bills and little in the way of assets.  On July 29, 1906, the Syracuse Journal reported that a petition of involuntary bankruptcy was filed in the United States court against Howe and noted that Thomas A. Mars–superintendent of the shop–was appointed receiver of the business.   At that time, it was estimated that the company’s debts were about $12,000, or roughly twice the estimate of the value of the company’s stock and accounts.

The Onondaga Metal Shops never lasted long enough to produce any catalogs, nor do they appear to have advertised their wares.  While in Bankruptcy, the company was purchased in September 1906 by Henry Benedict and moved from Syracuse to East Syracuse where it became associated with the M. S. Benedict Manufacturing Company, a firm primarily known for their silver plated wares.  Known as “Benedict Art Studios,” this reworked version of the Onondaga Metal Shops began advertising shortly thereafter, but continued to stress the connection between to Benedict Manufacturing Company.  At first, Benedict Art Studios appears to have been housed in a separate factory, but by April 1907 the company announced plans to enlarge their building in East Syracuse–essentially doubling their floor space–in order to allow for increased production of their flatware and other products.  As the journal Fabrics, Fancy Goods, and Notions informed their readers: “With the completion of the addition the company will be in a position to very materially increase their output and with the recent acquisition of the Onondaga Metal Shops, now known as the Benedict Art Studio, for the making of art goods in hand-wrought copper, brass and iron, they will be in a position to serve the fancy goods trade in first-class shape and in greater quantity than ever before.”  It is likely that at this time the concern’s entire facilities were merged and though the name “Benedict Art Studios” continued to be used for the next several years, there was no longer a separate facility for production. For instance, in 1911 when the Sanborn Fire Insurance Company mapped East Syracuse, they made a thorough survey of the factory but no mention of a separate facility for the production of Arts and Crafts metal. 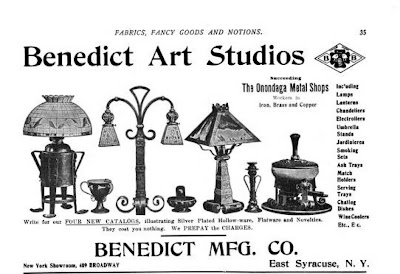 The M. S. Benedict Company’s facilities occupied virtually all of the land on a triangular plot which was bounded by Highland Avenue, West Manlius Street, and West Yates Street.  The factory was located about one block away from the railroad line which ran through the center of town.  The company’s space was comprised of a number of buildings which included storage areas, facilities for “Casting and Metal Mixing,” office space, and a separate building labeled “Empire Dep’t.”  It would appear that rather than being operated as an independent aspect of the larger company that the designation “Benedict Art Studios” was more akin to a line of wares produced by Benedict Mfg. Co.  The relative paucity of known examples of the work seems to indicate a very limited operation.  Extant advertisements and notices only use the designation through 1911, though the production of hammered copper wares continued under Benedict Manufacturing Co., until at least 1912.

Aesthetically, the Onondaga Metal Shop’s work followed is indebted to forms produced by Stickley and examples of British metal work including examples of pieces from Art Fittings Limited.  For at least two examples of work—a humidor and a wall plaque—the designs were directly copied from Stickley’s examples.  As a result of the direct use of designs and the close proximity of the shop to Stickley’s operation, it seems likely that a worker with knowledge of these objects must have been a link between the two factories, though in the absence of an employee roster at this period this remains a matter of conjecture.

The best available research on the firm has been undertaken by David D. Rudd of Dalton’s Antiques who authored the article “Wrought in Syracuse: Onondaga Metal Shops and Benedict Art Studios,” available online at http://www.daltons.com/mag2.html.

“Howe is Bankrupt,” Syracuse Herald, July 29, 1906.  Later reports listed the receiver as Charles G. Baldwin.  See “Metal Shops Bought by Benedict Company,” The Post Standard [Syracuse], September 25, 1906.  Howe also applied for bankruptcy in 1909 in order to prevent him from paying back about $10,000 owed to his father.  See “In Voluntary Bankruptcy,” Syracuse Herald, March 19, 1909.

“Increasing Their Facilities,” Fabrics, Fancy Goods, and Notions 40 (November 1906): 48 notes “The Benedict Mfg. Co., of East Syracuse N. Y., have taken over the entire plant of the Onondaga Metal Shops, and have moved the machinery to East Syracuse, building a special factory to accommodate the same, which will be known as Benedict Art Studio.  It seems likely that this was a separate facility on the company’s grounds since no additional addresses or listings have been located.

“At Pittsburgh,” Crockery and Glass Journal 74 (September 21, 1911): 20 noted: “a new electric portable display... which is attracting considerable attention.  It is made by the Benedict Art Studio Co., of East Syracuse, N. Y.”  By May 1912, hammered copper wares do not appear to have used the “Benedict Art Studios” name any longer, see “Exhibition of Fancy Goods at the Palmer House, Chicago,” Fabrics, Fancy Goods, and Notions 46 (May 1912): 51 for hammered copper wares being displayed under the Benedict Manufacturing Co. name.