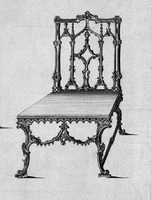 Thomas Chippendale, detail of Plate XXI from The Gentleman and Cabinet Maker's Director, 1754.

With parallel sides terminating in sharp point at its top, the Gothic arch is easily distinguished from Roman arch with round top that preceded it.  Emerging in the mid-12th century in France, it fell out favor during the Renaissance period, only to come back into vogue as a decorative element in the 18th century.

Since the publication in 1754 of Thomas Chippendale’s The Gentleman and Cabinet Maker's Director the Gothic arch has been a staple of furniture design.  Although designer Henry Wilkinson has been credited with the introduction of this motif to Stickley’s furniture, the use of this shape was neither revolutionary or unique for the time. Indeed, Gustave Stickley’s adaptation of the motif in 1900 is part of a broader dialog of design history that transcends any single designer.

Although the early-19th century represented a swing away from the extravagance of the Rococo period and inaugurated a period of more staid, reserved classicism the Gothic Arch continued to persist as motif. This arm chair, made in New York by the firm of Slover and Taylor during the first decade of the nineteenth century, is one of many examples that demonstrate the pervasive nature of this motif. Similar chairs were made throughout the United States at the time. 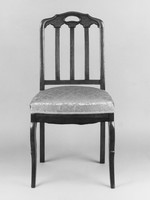 Throughout the 1830s and 1840s, as the classical impulse gave way to a moodier embrace of revival styles, the Gothic arch’s popularity exploded.  This oak chair from about 1835-50 was made in New York by an unknown firm that clearly catered to the popular taste.  Although the chair lacks the classical austerity of its predecessors, the rhythmic spacing of the back slats and upward draw of the pointed arch continued to be an effective design strategy. 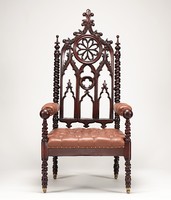 Even the venerable designer and manufacturer Joseph Meeks found time away from his Rococo-inspired revival fantasies to explore the Gothic arch in this chair from about 1850.  More a cathedral than a simple chair, this is Gothic exuberance at its most frenetic.  It is precisely this type of decoration, new to audiences of the mid-nineteenth century, which American reformers took umbrage to by the century’s end and sought to reform. 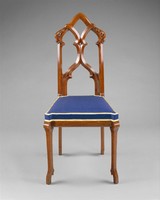 Not every designer embraced the over-the-top Gothic interpretation of Meeks, even during the 1850s.  Alexander Jackson Davis’s side chair, made just seven years after the Meeks example, speaks to the quiet restraint and dignity of Gothic that was being promoted by English writers and designers like John Ruskin and Augustus Pugin, figures who would heavily influence the emergence of the Arts and Crafts movement in the United States. 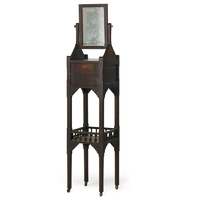 Throughout the 1880s firms like Kimbel & Cabus embraced a neo-Gothic style that blended some of the design reform ideas coming out of England with an American exuberance for decoration that was fostered by rising wealth.  Drawing their inspiration from reformers like Charles Eastlake, these firms adapted their idea of the Gothic to suit contemporary tastes. 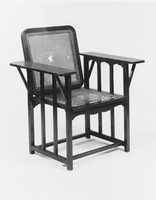 Designed by David Wolcott Kendall and manufactured by the Phoenix Furniture Company in Grand Rapids, Michigan, this McKinley Armchair (ca. 1894-96) is not radically different in conception than what Stickley would produce in 1900.  Made of oak, the forms are rectilinear and simple, and the materials are unobstructed by painted decoration.  The subtle adaptation of the Gothic arch under the armrest is a strategy employed in Stickley’s furniture in New Furniture from the Workshop of Gustave Stickley and early catalogs by the United Crafts. 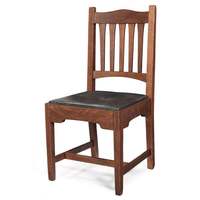 The Gothic arch as a decorative element had a long and storied history prior to Stickley’s embrace of it in New Furniture from the Workshop of Gustave Stickley in 1900.  So who designed the Gothic arch that appears in many of these early examples?  Based on the limited information we have from this period, the question remains unanswerable.  Regardless of who was ultimately responsible for this element, one thing is certain: Stickley’s factory kept abreast of contemporary design trends and used that vocabulary to create individual and sophisticated designs.